What's blood for, if not for shedding?

There's a popular opinion in the horror community that some of the best horror doesn't even need blood or gore to be scary. I agree entirely but I don't always watch horror to be scared; I often watch horror to be entertained. Gore is often missused which has led to many people feeling its pointless/a cheap way to make a movie shocking. Again, I agree but there's something so enjoyable about well executed gore. This page will function as a gallery for both gore that I felt was done amazingly or simply because it amused me when I saw it. There's many spoilers below so be forewarned.

The Hitchhiker's Hand in The Texas Chain Saw Masscre 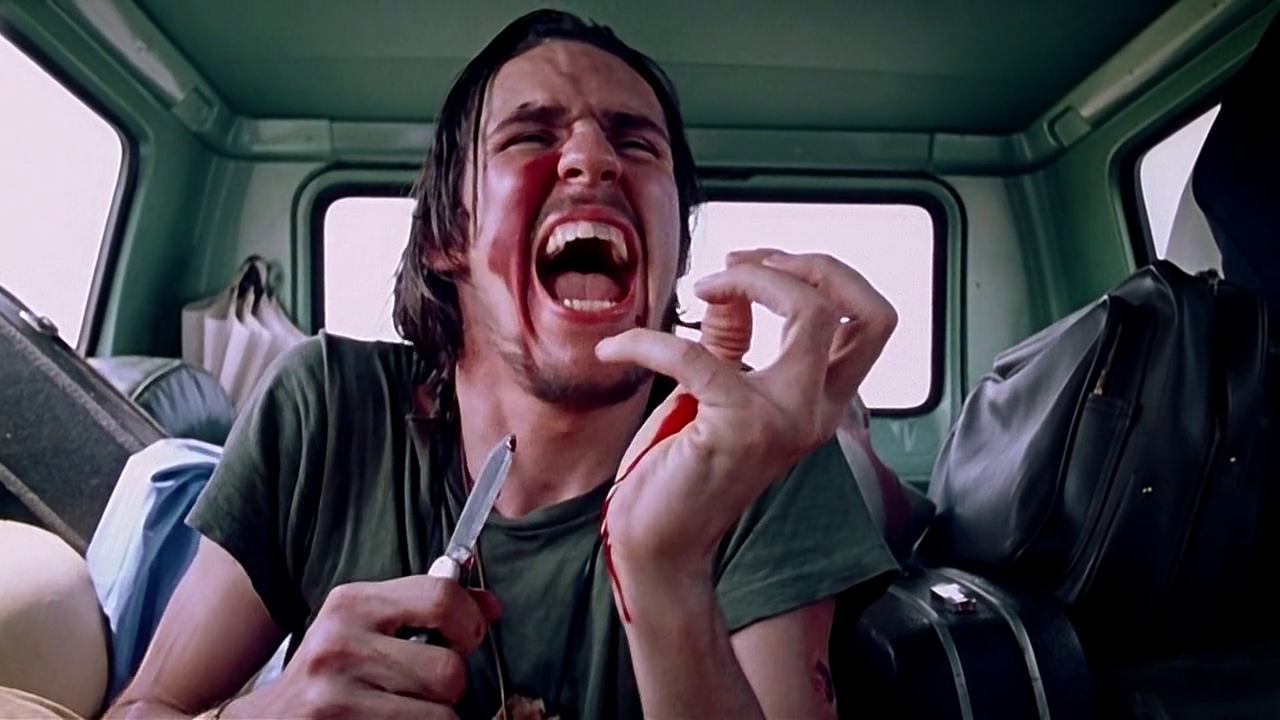 This is a bit reverse to the point I was making about loving gore as there's very little blood at all in the 1974 The Texas Chain Saw Massacre but the first instance we see of human blood isn't from a victim of the Sawyer family but from a Sawyer himself. The hitchhiker, later named 'Nubbins' in the sequel, is already unsettling as soon as he's brought into the car with the soon-to-be victims. He isn't outwardly hostile at first, appearing simply unstable. Franklin and he even begin to talk and discuss meat processing, a reccuring theme in the film, before the hitchhiker pulls a pocket knife Franklin is fiddling with from his hands. He grins, giggling as he makes sure the other passangers of the car are watching, before slicing into his palm. There's a bit of blood but no where near what is pretty common in horror, especially over the next decade, but the slow pace at which he cuts his own skin in addition to the lack of "scary" music and his never wavering excitement really adds to the scene. TCM's lack of much music is one of my favourite things about it as it makes the horror seem so much more real.

The Meat Cooler in Sally Face 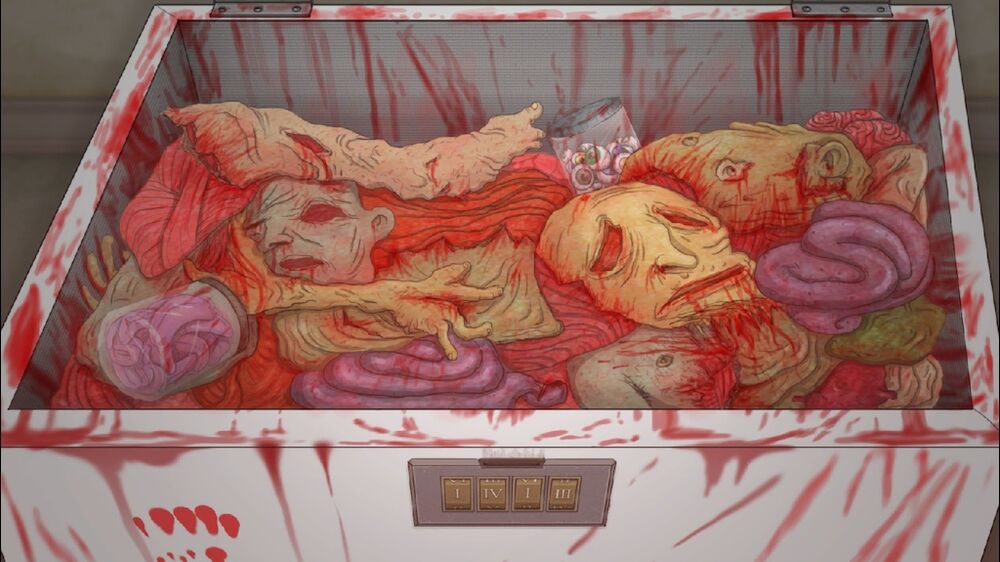 This image on its own is pretty horrific and memorable but the way it leads up to it is something else. You play as a highschool student who is trying to figure out what's in the lunch meat that's making the kids at school so ill. Any horror fan probably figures out from the first mention of a mystery meat that its human and yet that only adds to the eventual reveal. The audio of the cooler creaking open along with the first time we see any proof that the meat is actually human is iconic. The feeling of certainty that isn't being confirmed as you search a teacher's apartment for what she could be putting into the meat, showing multiple red herrings as to what it could be but the player usually knows, deep down, what it is. This somehow doesn't make the reveal any less shocking. I personally believe this relates to Alfred Hitchcock's "bomb theory", the idea that knowledge something bad is coming makes fear much more intense than an unprompted surprise.

Dr Hill's Head in The Re-Animator 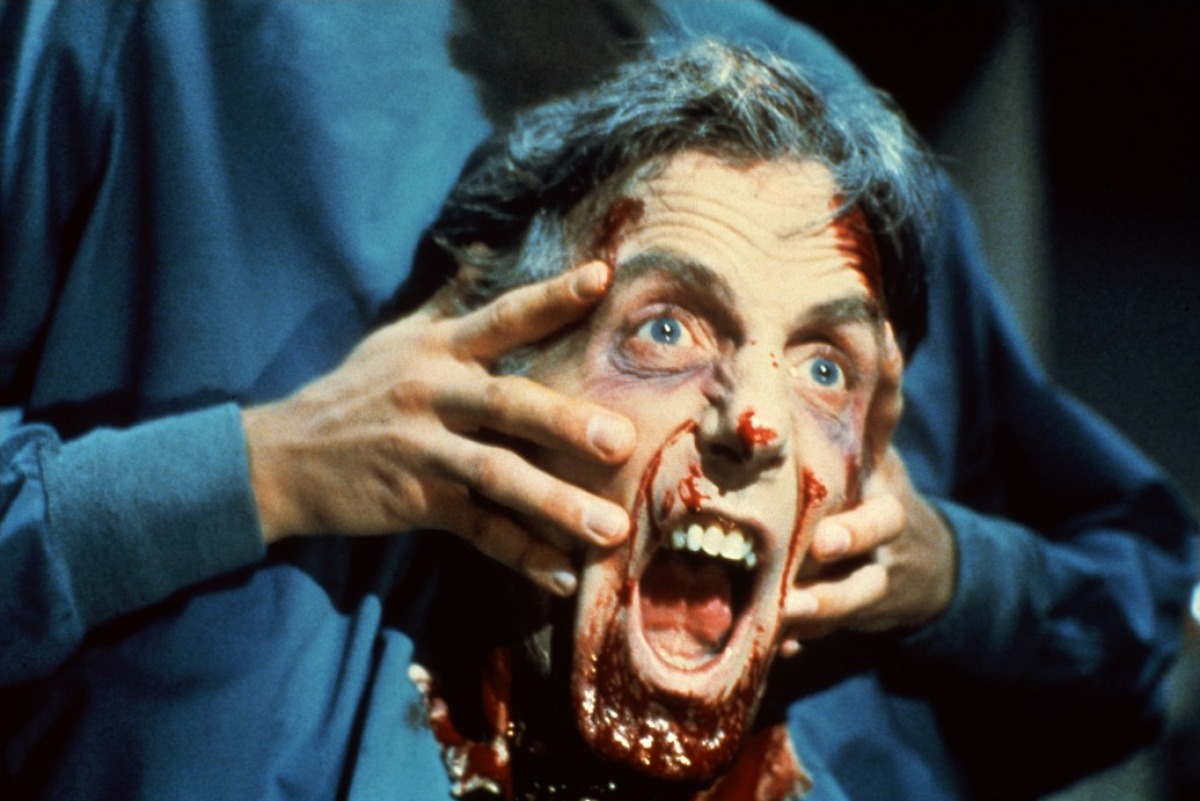 The Re-Animator is an amazing movie in my opinion. It's campy, silly, and just so much fun. The gore is so bizarre and comical without ever making it too obvious that its meant to the funny. I'd say its a bit less comedic but in the same kind of tone as the Evil Dead series. The character you're seeing here is the film's main antagonist, a rival scientist, plagarist, and general creep named Dr. Hill. The main character, Herbert West, arrives with a vendetta against him from the start and they certainly don't hit it off when Herbert openly defies him in his class. This all culminates when Dr. Hill attempts to steal the student's work and Herbert fights back by decapitating him. There's a wonderful shot of Dr. Hill gurgling blood just before the head is fully severed. So, how come his head seems so... alive? The title should probably give it away but Herbert West has been working on re-animating dead tissue and, seeing a fresh sample, can't controll himself. The severed head and shambling body lead to a lot of fun physical comedy as the movie continues, leading to more gore on Dr. Hill's behalf.

The Reverse Bear Trap from Saw

The first Saw movie, unlike its many many sequels, isn't very gorey at all. It's mostly left up to implications which adds to the terror of the film. This scene is probably the gorest of the film, and certainly the most memorable. We have a kidnapped woman, Amanda Young, with her head trapped in an odd contraption, and a supposedly dead body of her drug dealer in front of her. She's supposed to be able to free herself from the trap before it rips her head asunder as long as she cuts open her dealer's stomach to retrieve the key. Before she can fully convince herself, the body begins to rouse, eyes bleary and confused as he sees Amanda over him. Regardless, she slices into him anyway and the dreary and muted scene is shown vibrant red as she digs through his intestines to find the key. No sooner than she gets it off, the trap snaps open with a loud clang and Amanda is left, sobbing with her blood running from her now scarred mouth. This burst of colourful gore is amazing in the dreary setting of the film, beautiful against the grime. His almost cartoonish entrails in her hands is shockingly beautiful. It also gives us an idea of what is expected from the kidnapped victims of the series and easily becomes the most recognizable item in a series of bizarre and horrific traps.

Body Horror of The Thing

The entirity of the 1982 film The Thing is amazing. The body horror of it is indescribable and, even if you don't find it scary, the gore is worth seeing in and of itself. The practical effects are breath taking and shocking as we, the audience, learn of the strange creature that the scientists in the film are dealing with. I highly recommend it if you're sick of horror movies where the main characters seem too stupid to function. This follows a group of capable scientists trying everything they can to survive while distrust begins to become a necessary evil. If you get the chance, watch this movie.